Yōgen-in, a Must-See Spot Where You Can Always See Masterpieces by Tawaraya Sōtatsu, the Founder of the Rinpa School

After born in the Edo period, The Rinpa School has had a great influence on the contemporary art scene. A recommended sightseeing place about which not many people know, in Kyoto is Yōgen-in, where you can always see the masterpieces of Tawaraya Sōtatsu, the founder of the Rinpa School.

Yōgen-in was built in 1594 by Toyotomi Hideyoshi, who accepted the wishes of Nagamasa’s eldest daughter, Yodo-dono, to pray to the Buddha for the repose of the soul of Asai Nagamasa, a renowned as a bushō (Japanese military commander). The present main temple still maintains its original appearance at the time when it was rebuilt by Ogō, Yodo-dono’s younger sister, after destroyed by fire in 1619.

According to popular tourist guides, the main temple’s ceiling, so-called “blood ceiling,” tends to be thought of as the highlight because the ceiling of the main temple is made of wooden planks which had been used as the corridor of Fushimi Castle when Torii Mototada and others in Tokugawa side suicided after the castle fell. However, in fact, the eight sugito-e in this temple, which were created by Tawaraya Sōtatsu, a genius painter of the Rinpa School from Kyoto, is the ultimate highlight of highlights.

In the thick cedar wood sliding door, there are three pictures painted, “Karajishi-zu (Lions Painting),” “Nami ni Kirin-zu (Kirin with Wave Painting),” and “Hakuzō-zu (White Elephants Painting),” all of which are designated as Important Cultural Properties.

The representative work by Tawaraya Sōtatsu is “Fūjin Raijin-zu byobu,” which is designated as a national treasure, but the painting on a Sugito-e in Yōgen-in is known as a work which brought him into prominences. At the time of the reconstruction of Yōgen-in, Ogō had asked painters from the Kano School to create the paintings, but when she was fed up with the slow progress of the work, she asked Ogata Sōhaku (grandfather of Ogata Kōrin) who was associated with the Asai family to find suitable painters. Then, Ogata Sōhaku consulted his uncle, Hon-ami Kōetsu, and Tawaraya Sōtatsu was chosen. Tawaraya Sōtatsu, who was an unknown fan painting artist at the time, was marked out. He became well known to the world through his sugito-e paintings and he was given opportunities to create many major works of art in the second half of his life.

The themes of sugito-e, “Karajishi” and “Hakuzō” are said to be the vehicles of Monju Bosatsu (Manjushri) and Fugen Bosatsu (Samantabhadra), respectively, and it is said that by painting them, Sōtatsu comforted the spirits of Tokugawa vassals who died violently.

All of the works are splendid, but the two panels of “Hakuzō-zu” are particularly striking for their bold and powerful depictions, which show the free and easy life filled with energy of the artist, Tawaraya Sōtatsu, allow viewers to fully experience the real pleasure of arts, about which seeing is better than hearing. 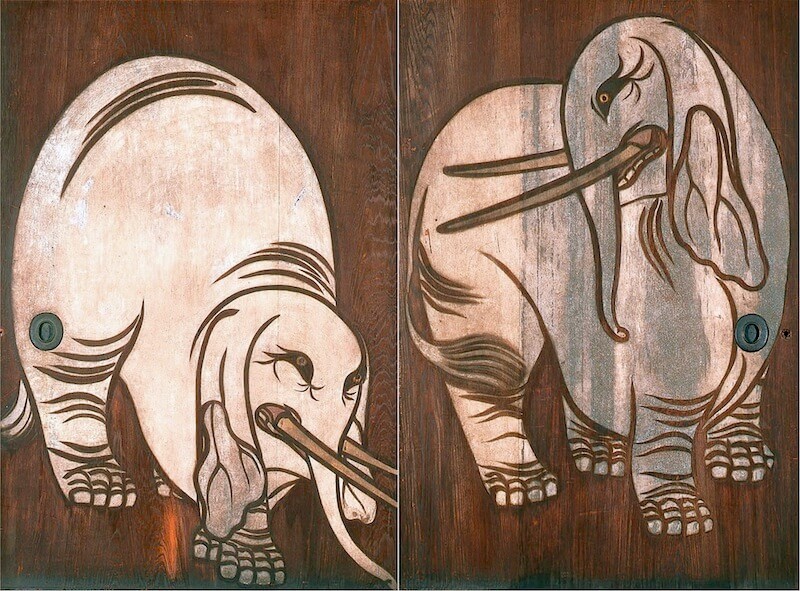 Yōgen-in is one of the best sightseeing spots because it is only place in Kyoto where visitors can see Rinpa School’s works in the same place where they were painted in the past time. If you are interested in the Rinpa School, it is highly recommended that you visit this place when you come to Kyoto.

Mochizuki Shunkō: Master of Paintings in the Flower-and-Bird Genre Who Loved and Enjoyed the Beauty of the Four Seasons.

Mochizuki Shunkō was a Japanese painter ...

Murase Gyokuden: A Talented Japanese Painter Who Painted the Official Paintings of the Imperial Household

Ezaki Kōhei: A Japanese-Style Painter Who Was Widely Active in the Art World of the Shōwa Period

The picture reminds us of a plump and we ...

Gōkura Senjin: The Master of Kachō-ga (Painting of Flowers and Birds) and a Buddhist Painting Who Lived before and after the War Time.