Tawaraya Sōtatsu, who is too famous with his masterpiece named the ” Folding screens of Wind God and Thunder God,” and Hon-ami Kōetsu, who left some masterpieces including a national heirloom named “Rakuyaki Shirokatamigawari Chawan (Raku tea bow half-body changed white-colored)” and one of ” Three great calligraphers of Kan-ei era”. Surely, so many people know a school of “Rinpa”, which had been founded by those two persons, and was inherited and developed by Ogata Kōrin and Sakai Hōitsu subsequently.

Nakamura Hōchū (?-1819) was a painter of the Rinpa school and active in Osaka in the latter half of the Edo period. The year when he was born has been unknown, and literatures and materials to know his life has been few as well, which has made him a mysterious painter. Here are some accounts for “White Plum Blossoms” drawn by him as follows.

Hōchū, who revered Ogata Kōrin and published “Kōrin Gafu (Picture Book of Kōrin)”, heavily used *Tarashikomi that is a unique painting technique in Rinpa school dripping gold and patina colored paints to the trunk and branches of the tree in this masterpiece. We can see the typical technique of Rinpa school in the centers of the flowers that were painted with gold paint as well, which makes us feel Hōchū’s strong veneration to Kōrin in his painting of the designed plum blossoms and shapes of the branches.

* Tarashimi: One of the Japanese painting techniques, which drips the other colors onto the original colored paint before it dries and bring about a unique colors effect by the bleeding among the colors. Sōtatsu was the first one who attempted to use the effect consciously. Thereafter, Rinpa school frequently used the technique for their paintings.

However, the shapes of the plum blossoms look just facing to whoever is looking at them. And the all branches are going growth upwards. Those freewheeling beyond the conventional manner makes this piece of work more fascinated. The indeed pleasant painting style is the typical one that can be seen in Hōchū’s works. Hōchū who mastered the technique on his own was also known as a highbrow so that he was familiar with seventeen-syllable verse and closely interacted with litterateurs and literati painters, which has gone around until today.

The unique personality of Hōchū can be seen in his signature part. 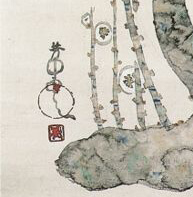 The signature written in the lower left on the piece of work looks as if it were assimilated with the shapes of the branches and the blossoms for a moment. The personality and wit of Hōchū who loved freedom and was an ultimate highbrow are given off from the way as well. This piece of work should be one of his masterpieces that we can feel the fascination of Nakamura Hōchū who showed a unique presence even as a painter belonged to Rinpa school.

Maruyama Ōryū: The Painter Who Succeeded the 4th Generation of Maruyama School

Kōno Bairei: Central Figure in the Foundation of Modern Japanese Paintings in Kyōto

Ogata Kōrin was a painter active in Kyot ...