Ogata Kōrin was a painter active in Kyoto during the Edo period. His impressive works, which later became the driving force behind the creation of the school of painting known as the Rimpa school, also fascinate people today.

In this article, we will introduce the charms of his masterpiece, the Irises folding screen.

The number of colours used in the Irises folding screen is largely limited to verdigris and ultramarine blue colours. The rest of the colours are extremely few, with the only colour being the gold of the background.

In Japan, of course, there was a custom from that time of appreciating monotone works that used no colour at all, such as suiboku-ga (ink painting), but apart from this, coloured works were also favoured.

The variation in colour is less than in other countries due to the nature of the material, but even so, it is unusual to find so few colours as in the case of the Irises folding screen.

It is clear that this expression was quite experimental for Ogata Kōrin. Moreover, as this work was early in his artistic career, it shows that he possessed an exceptional sense of style.

Such a sense is understandable, as his lineage contains the same DNA as that of Hon-ami Kōetsu, the founder of the Rimpa school.

However, the Irises folding screen actually has another trick up its sleeve.

From a distance, the painting looks as if it is painted in only two colours, verdigris and ultramarine blue, but closer inspection reveals that the blue of the petals has been painted in several different shades of paint. In contrast, the leaves are painted monotonously in green. In this way, the leaves are more like a garnish to complement the flowers, allowing the viewer to concentrate on the changing colours of the petals.

It is an interesting piece of work with a really well-calculated elaboration. 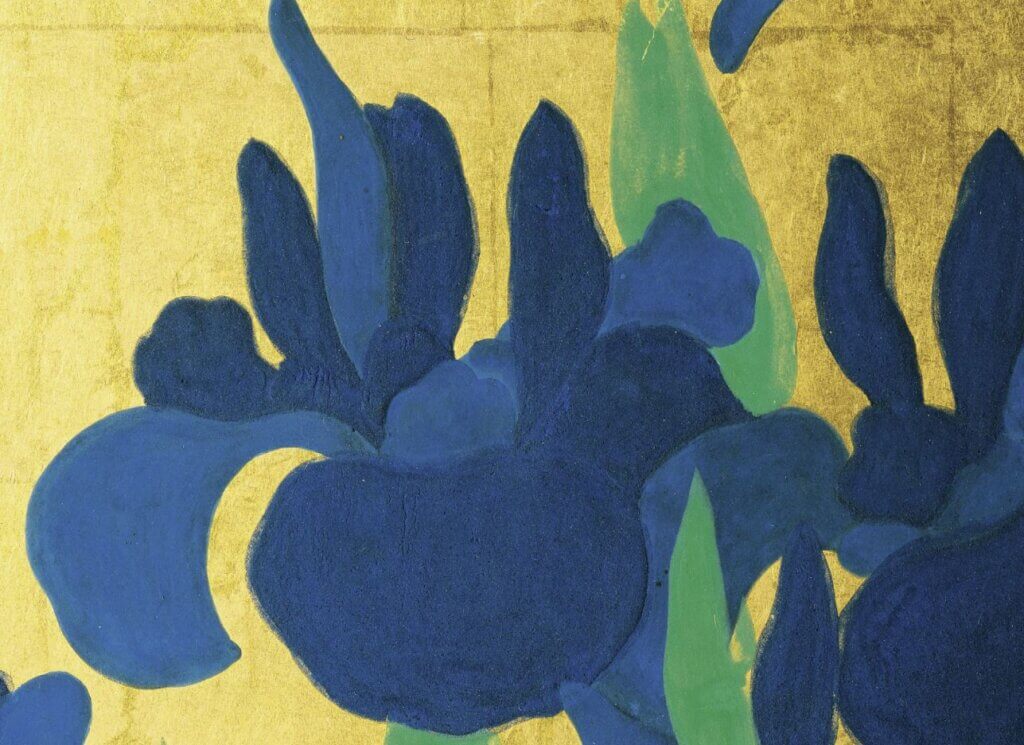 Frequent Use of Copying and Pasting

The Karigane-ya was a high-class kimono merchant that received orders from the Toyotomi and Tokugawa families, who were the powerful men of the time, so their products were all first-class.

Moreover, as mentioned earlier, the wife of Ogata Dōan, the founder of the Karigane-ya, was the sister of Hon-ami Kōetsu, and the Ogata and Hon-ami families were related.

Furthermore, some research suggests that Tawaraya Sōtatsu also married a member of the Hon-ami family, so it is clear that these three families were closely related.

Considering that the Karigane-ya was a house where many national treasures were placed in modern terms, one can imagine how unusual Ogata Kōrin’s upbringing must have been.

Such uniqueness of Ogata Kōrin is also expressed in this work, the Irises folding screen.

The same shape is actually used elsewhere in the depiction of these irises. 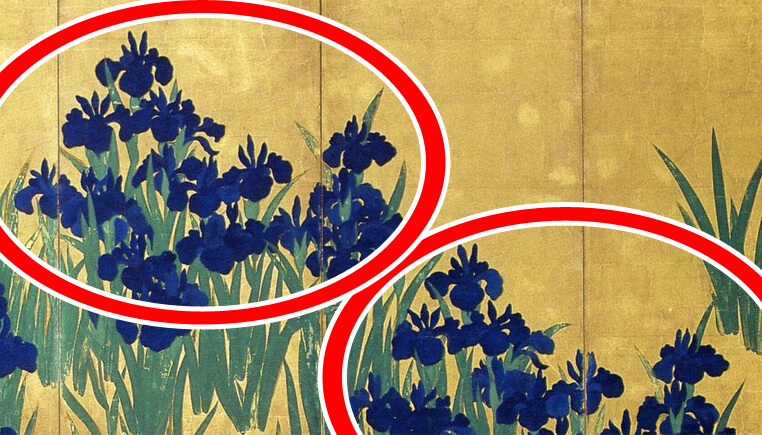 The expression brilliantly turned the conventional view of painters at the time that a painting was to be completed by depicting each object in different style.

The reason why Ogata Kōrin came up with this copy-and-paste technique stems from his upbringing in a kimono merchant environment.

Japanese kimono designs usually use a lot of repetition of the same pattern.

Ogata Kōrin appropriated this technique to the world of painting.

A characteristic of the Rimpa school, not only Ogata Kōrin, is the successful transfer of the designs used in these crafts and the sensibilities associated with them to the world of painting.

In Kyoto, not only kimonos, but also fans, *makie and various other crafts have been produced since ancient times, and naturally the designs used in these crafts were also well developed. The designs of these crafts could have come to the world of painting at any time, and it was Hon-ami Kōetsu and Tawaraya Sōtatsu who triggered this trend, and Ogata Kōrin who developed it rapidly.

The Irises folding screen by Ogata Kōrin is truly a milestone of the Rimpa school.

This work is stored at the Nezu Museum in Tokyo and is exhibited every year in May, when the irises are in bloom, and should be seen if you have the opportunity.

Tawaraya Sōtatsu, a Pioneering Designer. Dissecting His Genius for Composition and Expression!

A Beautiful Tension Created by a Free an ...

Kamisaka Sekka: A Successor of the Rinpa School at the Modern Age

Maekawa Bunrei: A Master of Kachōga, Active in the Modern Kyōto Art World

Tonouchi Mishō: A Japanese-Style Painter Who Gave New Sensation to the World of Yamato-e.