‘Nanga’ is a genre of painting that became popular after Chinese Southern School paintings were introduced to Japan and Japanised.

It became popular, especially among intellectuals, from around the mid-Edo period.

The general explanation is often the same as above, but we would like to explain it with a little more resolution. 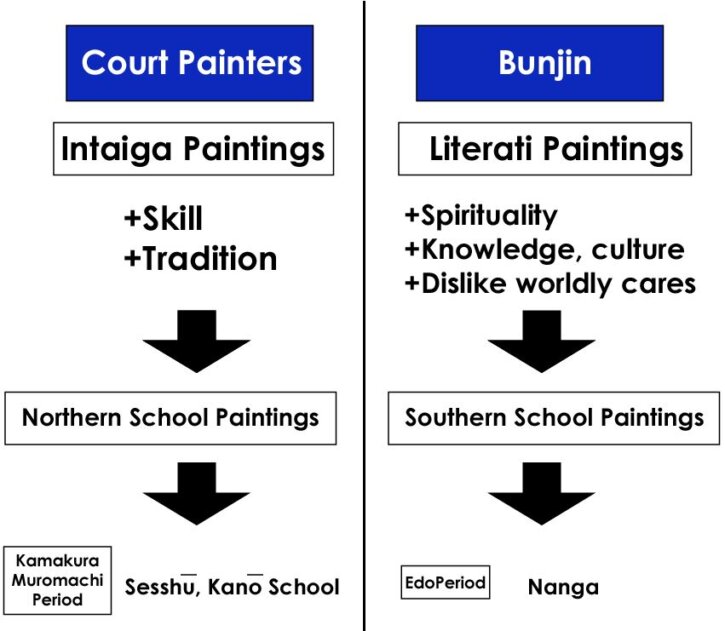 Originally, in China there were court painters who served the dynasties. (They painted what is known as ‘Intaiga paintings’).

Court painters valued the skill of painting with an emphasis on realism and colouring. Well, since they served the court, they were more concerned with tradition than individuality.

A painting style that did not stray from the conventions was preferred over an eccentric style.

In contrast, the Bunjin painted ‘literati paintings’, which were more focused on spirituality.

Therefore, Bunjin disliked worldly cares such as money and honour, and idealised living like a noble hermit in the midst of nature.

The above is, roughly speaking, a bipolar structure, but over time the two characteristics have become less and less strictly separable.

It’s easy to imagine that even some court painters may have superior spirituality, and some literary painters may be secular.

The definitions of these two painters have become blurred over time, but we have defined them roughly so that the concept can be understood.

These were introduced to Japan.

Northern School paintings was introduced to Japan around the Kamakura – Muromachi period and later developed into the Sesshū Tōyō and Kanō school.

However, Japan did not have the literati of China and could not fully understand Southern School painting due to its different history and culture in the first place, so it had to be translated and understood in the Japanese way.

This is how the Japanese ‘Nanga’ was born.

From the mid-Edo period onwards, this nanga became very popular, especially among intellectuals and warriors, and dominated the art world.

However, a turning point came in the Meiji era.

Kaneshige Ankō: A Female Japanese-Style Painter in Combat Over Adversity, Master of Kachō-ga

Tawaraya Sōtatsu, who is too famo ...