Watanabe Shōka was born in 1835 in the Edo clan’s residence as the second child of Watanabe Kazan. It is said that Watanabe Shōka was a strong looking man similar to Kazan. In 1841, Kazan committed suicide, but he endured the sadness with his wise grandmother and gentle mother’s help. In 1844, Shōka went to Edo and became a disciple of Tsubaki Chinzan. Shōka, who had been improving his painting skills under Chinzan for more than ten years, became the head of his family in 1856. He went to Toyohashi, Aichi Prefecture in 1874, then moved to Hyakkaen in 1877, and had a painting room there until 1882. In 1877, he got Kamonshō prize at the 1st Naikoku Kangyō Hakurankai exhibition, which was held at Ueno Park. This era was called Shōka’s era of Hyakkaen, because many flowers were planted in front of his garden and he enjoyed the flowers of the four seasons.

This work, which used sumi ink skillfully, was made before Shōka went to Hyakukaen, but the reason why this work is a Meika Jūyū-zu of ink painting is because it was based on the sketches of familiar flowers.
Meika Jūyū are the 10 frineds anthropromorphized from 10 kinds of famous flowers chosen by a Chinese poet. This work expresses those flowers with exquisite brush strokes, and the painting that was painted with the full use of the tsuketate technique (one of the typical techniques of Japanese painting that does not draw the outlines but do with one brushwork containing light and shade, two types of Sumi inks or paints simultaneously at once so that the result can express the shade and the stereoscopic effect, which can be often seen in Maruyama and Shijō schools) creates a kind of refreshing feeling. This painting is something that can only be created by ink painting.

which can be often seen in Maruyama and Shijō schools) creates a kind of refreshing feeling. This painting is something that can only be created by ink painting. 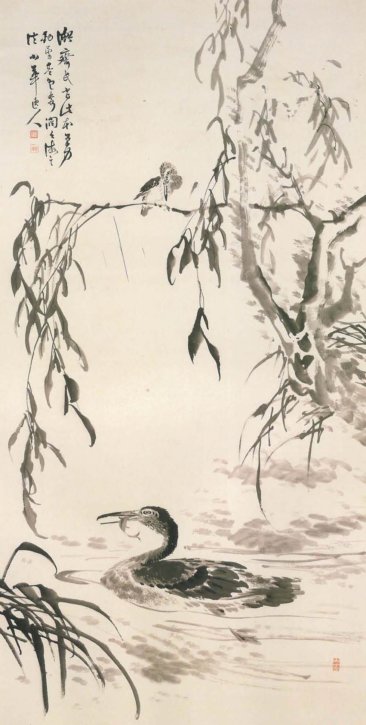 It is said that Watanabe Shōka was excellent in Kachō-ga (painting of flowers and birds), and there are works with gorgeous coloring such as 1887’s Meiji Kyūden Sugito-e painting in the Imperial Palace, but when you look at many of his ink paintings, you would notice that his true characters are shown rather in the ink paintings. It is not known when this work was made, but it is one of the masterpieces of ink painting in his later years. A large cormorant is moving its legs powerfully under willow leaves. It has a sweetfish in its mouth that was just caught. A kingfisher is enviously looking down from willow branch. It might be thinking about getting a sweetfish from the cormorant if there is a chance. The fun of this painting is that one scene is a drama. Although it is a large painting, there is no looseness in the composition, and the ink lines such as willow and indigo are drawn nicely and makes you feel calm maybe because the lines were drawn with plenty of water. Compared to Watanabe Kazan’s work, maybe because it was drawn on a paper, but the mild drawing method of water surface came from Tsubaki Chinzan’s influence.

When his brother died in 1856, Watanabe Shōka served the Tahara domain as a reign of the family. It was the third year since Tsubaki Chinzan’s death. Until then, Shōka was entrusted to Chinzan by his father Kazan, and Chinzan was teaching him to bring out the talent of Shōka. It was said that he was clumsy compared to Noguchi Yūkoku who studied under Chinzan together, but he continued to study hard.

Shōka left for Toyohashi, Aichi Prefecture in 1874, and in 1877 moved to Hyakkaen, which is connected to the precincts of Yoshida Shrine, and had a painting room there. Many literary guests and ink painters had visited there respecting Shōka.

This work was made when he went to Toyohashi, and he drew sweet osmanthus, peony, sea urchin, lotus, chrysanthemum, etc. of the Meika Jūyū, and in addition, a new taste is added with three leaves of paulownia leaves. The soft painting style is seen because he was influenced by Chinzan’s teachings.

In 1882, Shōka exhibited at the 1st Naikoku Kaiga Kyōshinkai exhibition, sponsored by the Ministry of Agriculture and Commerce, which was held in Ueno Park, and received a bronze prize. Since then, he went to Tōkyō to be a part of central painting circle and stayed in Hamachō. In 1887, while traveling in Chiba Prefecture, he suffered from intestinal typhoid and died at his home in Hamachō, after he returned to his house riding on a palanquin since he couldn’t find a good doctor in Chiba. He was 53 years old.

Katayama Gashū: The Nihon-ga Painter of Misfortune from Shiga Prefecture