Soga Shōhaku was a painter active mainly in Kyoto during the mid-Edo period.

Known for his eccentric style, he still attracts a lot of attention today.

In this article, we will talk about the oldest known work by Soga Shōhaku, “Pang Jushi (Hōkoji) and Ling Zhaonu (Reishōjo) Are Made to Look Like a Kume Hermit and a Woman” byōbu screen, in the collection of the Museum of Fine Arts, Boston. (1759, at the age of twenty-nine).

Kume Sennin was a legendary figure who was believed to be the founder of the Kume Temple (Kume Town, Kashihara, Nara Prefecture). He was mentioned in Buddhist literature as well as in many stories and essays.

He is said to have been born in the village of Katsuragi (present-day Gosho City to Shinjō-chō and Taima-chō, Kitakatsuragi County) during the reign of Emperor Kinmei (reigned 539?-571?). He trained at Mount Ryūmon (the boundary between Uda City and Yoshino-chō, Yoshino County) and acquired the art of divine flight.

He used to enjoy swimming in the air, but one day he saw the calf (some say thigh) of a young woman washing clothes on the banks of the Kume River and fell in lust, losing his divine power and crashing. (What the hell! You’re not a fallen angel, you’re a fallen hermit!)

In this painting, Soga Shōhaku depicted Kume Hermit admiring the young woman sitting on the bank of the river with her calves exposed. 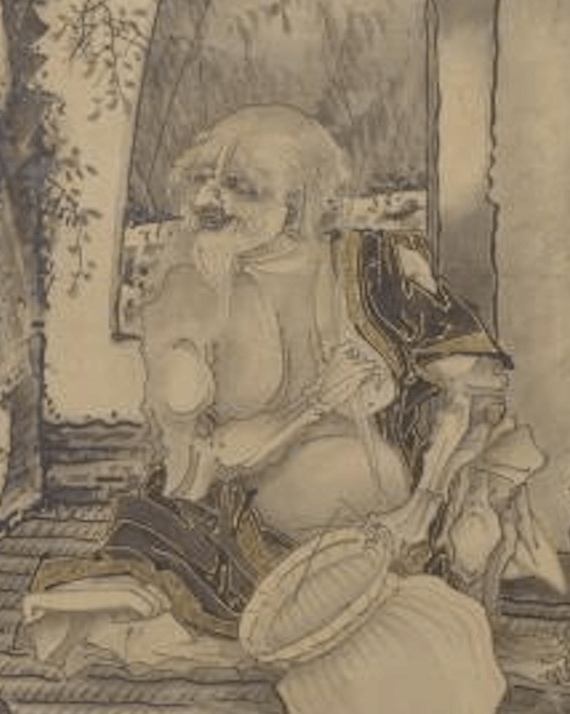 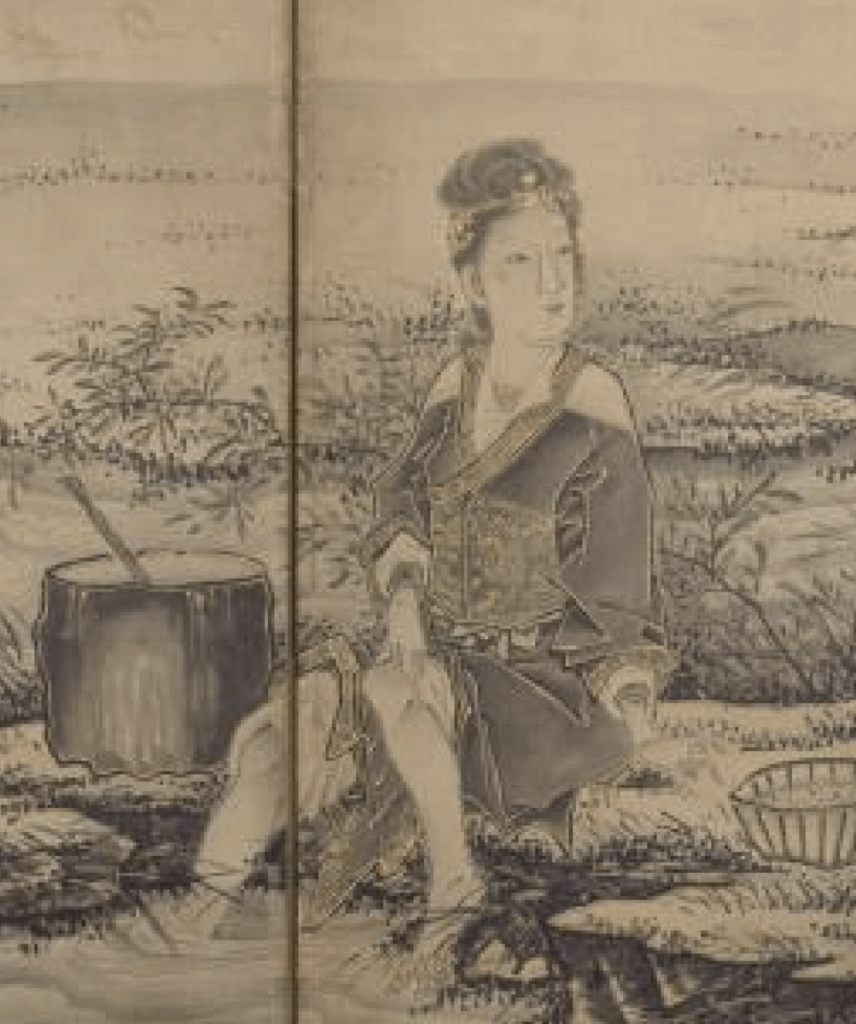 By the way, Kume Hermit later served as a layman when Emperor Shōmu (reigned 724-749) built the Daibutsuden (Great Buddha Hall) at the Tōdai-ji Temple, and was engaged in transporting lumber.

Knowing that people called him a hermit, a government official asked him if he could use his divine powers to carry lumber. After about a week’s training, Kume Hermit regained his divine powers and transported lumber cut from Mt. Yoshino by levitating it into the air and landing it at the proposed construction site.

Thanks to this, the construction of the Daibutsuden was completed quickly, and Emperor Shōmu gave Kume Hermit a piece of land on which he built the Kume Temple. This is the origin of the Kume Temple.

Pang Jushi was a Chinese Zen master of the Tang dynasty. During his life, he pursued the spirit of Zen without being a priest. The records of his dialogues with Zen priests, in which he maintained his position as a layman, were recorded at an early stage, and have been handed down to the present day, 1300 years later.

This is an intense work by Soga Shōhaku parodying Pang Jushi and Ling Zhaonu, depicting a Kume hermit and a beautiful woman.

Maekawa Bunrei: A Master of Kachōga, Active in the Modern Kyōto Art World

Tazaki Sōun: A Nanga Painter Overcame Struggles to Become a Renowned Artist in the Meiji Era.

Ogata Kōrin was a painter active in Kyot ...

The Most Powerful Bird Showdown in History! Itō Jakuchū, “The Rising Sun and the Phoenix” VS Soga Shōhaku, “The Eagle”

Hara Zaichū: The ounder of Hara School That Was a Painting School to Devote It the Orders by Court Aristocracies