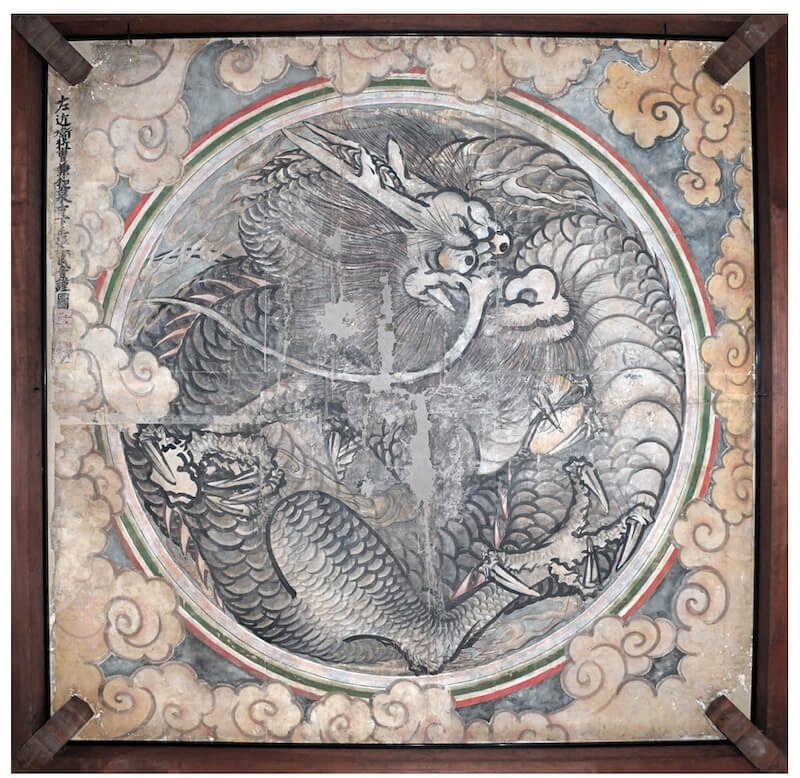 A ceiling painting of a dragon in the main hall of the Myōhō-in temple (Higashiyama-ku, Kyoto) has been found to be most likely the work of Chōshi Buon (1716-1775), a painter of the mid-Edo period. Chōshi Buon, along with Itō Jakuchū, Maruyama Ōkyo, and Ikeno Taiga, is briefly mentioned in the sources of the period as a painter who worked in Kyoto, but his work has never been found. The researchers and the temple officials who conducted the survey said, “The mystery has deepened why this is the only work left here.”

The main hall was completed in 1799 and is also called “Fugendō” (Fugen Hall) because it houses the main deity, Fugen Bosatsu. It is thought that the ceiling painting, which measures three metres square, was painted to protect the Buddha and protect against fire, but the artist and date of production were unknown.

Chōshi Buon was one of the 16 painters listed in the 1768 edition of the Heian Jinbutsushi, a comprehensive list of cultural figures active in Kyoto.

The ceiling painting has been under investigation since May 2017 by Associate Professor Sugimoto Yoshihisa of the Tōhoku University (then a researcher at the Kurokawa Institute for Research in Ancient Culture), who is an expert in early modern painting.

Based on the name and the position written on the painting’s signature, the artist was identified as a samurai who served the court. The date of production is estimated to be around 250 years ago, during the Meiwa period, based on the change in Chōshi Buon’s title and the indication of his status on the signature.

As the main hall was not usually open to the public, the outline of the ink painting of the dragon in the circle and the vermilion and other colourings are almost exactly as they were. On the other hand, the history of the painting was never recorded in the temple history, and no other painting by Chōshi Buon has been identified, nor is the school of painting known.

Sugimoto said, “Even though we need to continue researching the unknown points, it is valuable that the painting of the person who was listed with other leading painters of the Edo period has been preserved in a form close to the original. The Myōhōin office said, “We would like to protect it with great care, and make further clarifications.”

“Rabbit at Home”: Masterpiece of Takeuchi Seihō, One of the Great Painters in Kyoto, Painted at the Age of 75 Years Old

Born in Kyoto at the end of the Edo peri ...

Okutani Shūseki: A Painter Who Played a Central Role in Kyōto Painting Circle from Meiji Period to the Early Shōwa Period

What Is the Tan-yū Style?

Kanō Tan-yū was active as a painter for ...

Watanabe Shōka: A Painter Who Succeeded the Painting Style of Watanabe Kazan and Tsubaki Chinzan